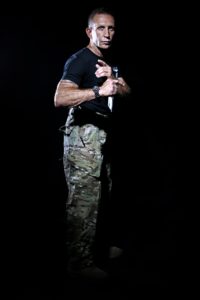 In 1998, Tim developed the official Close-Quarters-Combat system for the Philippine Marine Corps (PMC) Force Reconnaissance Battalion and conducted a six-month Instructor Qualification Course graduating 4
0 Certified Instructors. In 2000, this system was adopted as the official Combatives and Martial Art System for the entire Philippine Marine Corps, and was later adopted by Special Operations Units of the Philippine Army and other units of the Armed Forces of the Philippines (AFP). These programs developed and conducted by Tuhon Tim Waid marked the return of authentic Filipino Martial Arts to Philippine military doctrine and training since World War II.

Tim also served with distinction in the U.S. Marine Corps as an Infantry Platoon Sergeant, and as an Intelligence Sergeant in the U.S. Army National Guard. Tim has conducted Executive and Personal Protection operations worldwide as a Certified Executive Protection Specialist and has served as a Corporate Security Manager in Healthcare and Information Technology with industry leaders such as Ericsson and Texas
Instruments.